North Korea has announced that a ballistic missile test on January 11th was of a hypersonic glide vehicle, making it the second such test in less than a week following a launch on January 4th. The South Korean Joints Chiefs of Staff reported that the missile travelled at Mach 10 speeds, placing it on par with the Russian air launched Kh-47M2 Kinzhal as one of the fastest tactical missiles in service worldwide. The JCS further reported that the missile had flown at an extreme 60km altitude to a distance of 700km, indicating a range of several thousand kilometres if on a normal trajectory. The North Korean state run Korean Central News Agency (KCNA) reported a longer 1000km range, including 600km ”glide jump flight,” before accurately striking a target in the Sea of Japan. “The test-fire was aimed at the final verification of overall technical specifications of the developed hypersonic weapon system. The superior manoeuvrability of the hypersonic glide vehicle was more strikingly verified through the final test-fire,” KCNA reported on January 12th. North Korea first test fired a hypersonic glide vehicle in September 2021, with the Hwasong-8 missile combining such a vehicle with the body of the Hwasong-12 ballistic missile which has a 4,500km range. 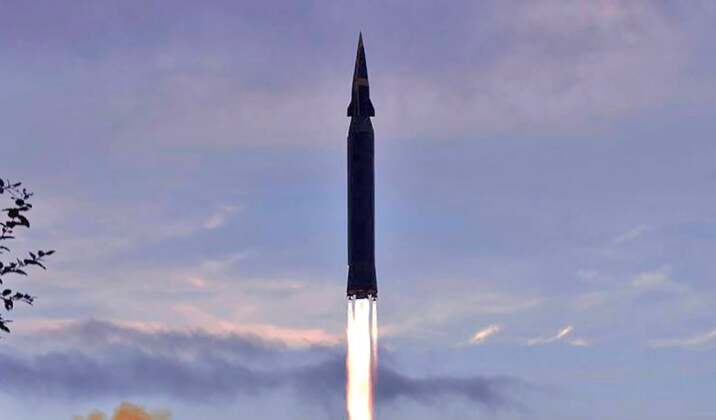 Hypersonic weapons have been a key field of technological development for major military powers, and should the Hwasong-8 enter service in 2022 it would make North Korea only the third country in the world to deploy such glide vehicles alongside Russia and China. China is the only country known to deploy a comparable ground-launched tactical hypersonic glide vehicle, with its DF-17 missile having entered service in 2019. Such weapons are highly prized for their manoeuvrability and ability to evade advanced enemy at defences, and in North Korean hands could provide a more reliable means of neutralising American military facilities on Guam and in Japan. These are heavily protected by AEGIS, THAAD, Iron Dome and other air defence systems. No air defence system in service today is thought to be capable of intercepting Mach 10 tactical missiles, particularly those that can manoeuvre at low altitudes.

Frequent testing serves as an indication of intensified efforts towards development, and the Hwasong-8 maybe intended for entry into service in 2022 with more tests planned later in the year. North Korea could subsequently potentially seek to develop hypersonic glide vehicles for other uses, including possibly intercontinental range nuclear strikes and neutralisation of enemy warships at long ranges. The country’s inability to procure modern combat aircraft due to an ongoing UN arms embargo, as well as the high cost of operating an up to date air force, has let it to invest heavily in both ground based surface to surface missiles such as the Hwasong-12 and Hwasong-8, as well as in mobile ground based long range air defence systems, to compensate for the lack of modern strike fighters or air superiority fighters. This asymmetric approach has been seen as the most effective means of maintaining a viable combat capability against the United States, with which it has been technically at war for over 70 years and against which its military modernisation efforts are primarily aimed.