On January 12th the first Russian Tu-160M2 intercontinental range strategic bomber made its first flight at the Kazan Aviation Plant, marking a major milestone in efforts to modernise the country’s airborne nuclear forces after the decision to relaunch production of the aircraft was announced in 2015. The aircraft reportedly flew for 30 minutes, with crew performing manoeuvres to check stability and controllability. The Russian Air Force expects to receive 50 new Tu-160 bombers to supplement the 17 already in service, with the first ten currently on order. Defence Ministry assessments concluded that only a production run of 50 airframes or more would make the significant investments made in reopening production lines and reestablishing complex supply chains cost effective, with the aircraft having terminated production in 1992 just months after the Soviet Union collapsed which made reopening lines particularly difficult. The Soviet Union completed production of 27 serial Tu-160 airframes, only 14 of which have survived to serve in the Russian Air Force today with the remainder either destroyed by the Ukrainian government, kept in Ukrainian museums or lost to accidents. The Russian Air Force has since enlarged its fleet by completing unfinished airframes at the Kazan Aviation Plant, after the Soviet collapse abruptly terminated production leaving them partially completed. Bringing these airframes into service was a far simpler task, however, than reinitiating serial production of new bombers. The Tu-160M2 that flew on January 2, 2021, was thus the first airframe built entirely in post-Soviet Russia. 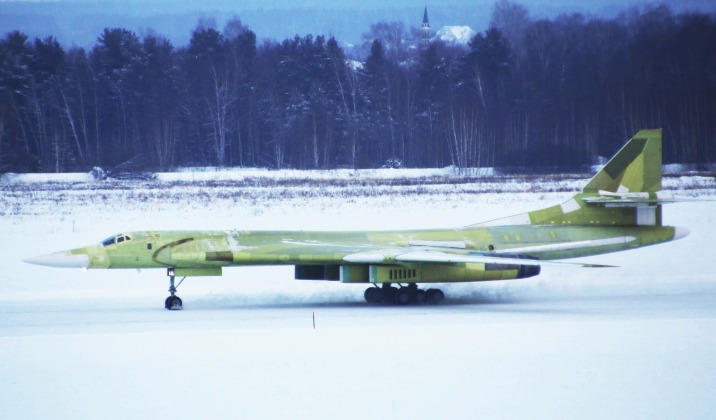 The Tu-160 first flew 41 years ago in 1981, and entered service in the Soviet Air Force from 1987 meaning it had served for just four years when the USSR collapsed. The country had reportedly planned to field at least 100 airframes, with multiple variants including electronic warfare, satellite launcher and even air to air platforms having reportedly been under consideration. More recently Russian President Vladimir Putin raised the possibility in 2017 that the Tu-160 airframe could be used as the basis for a passenger jet specifically for rapid travel between western Russia and the capital of the Russian Far East Vladivostok near Korea, with the the distance from Kaliningrad to New York being smaller than that from Kaliningrad to Vladivostok. The Tu-160 airframe holds 44 records and is the fastest and heaviest bomber to enter service worldwide with a speed exceeding Mach 2. It is also the only variable swept wing combat aircraft in production anywhere in the world today and has more powerful engines than any other combat aircraft. Despite its age, the Tu-160 is still one of the world’s two newest bomber designs alongside the American B-2 Spirit, which like its Russian rival is fielded in very small numbers with only 20 having ever been serially produced. The airframes of the new Tu-160M2 aircraft are almost identical to the Soviet era Tu-160 bombers, which reflects both the relatively slow progress Russian aviation has made over four decades as well as the extent to which Soviet aviation by the 1980s was ahead of its time. Nevertheless avionics and armaments have been revolutionised and new more efficient NK-32-02 engines integrated. The aircraft has entirely new mission systems and avionics including a NV-70M radar, digital cockpit displays, and navigation equipment combining inertial navigation, astronavigation, a doppler navigation radar and satellite navigation receiver. The 17 older Tu-160 airframes are also being modernised to this standard under the designation Tu-160M, with the first having flown in February 2020. The modernisation of the Russian bomber fleet with the Tu-160 comes as the country’s ambitious next generation bomber program the PAK DA faces considerable delays. While the PAK DA was initially intended to replace previous bombers from the mid-2020s, it is now expected to be produced in smaller numbers and fly alongside the Tu-160M2 for several decades to come. Although the Tu-160 is considered the world’s most capable strategic bomber by a considerable margin, its primacy is expected to be seriously challenged in the coming decade by the first genuinely post-Cold War Chinese and American designs the H-20 and B-21. It remains to be seen the extent to which the Tu-160 will serve as a stopgap until the PAK DA is ready, or whether it will serve as a replacement should Russia struggle to develop or fund the ambitious new bomber. Either way, however, Russia’s long held primacy in the capabilities of its strategic bombers remains seriously at risk.